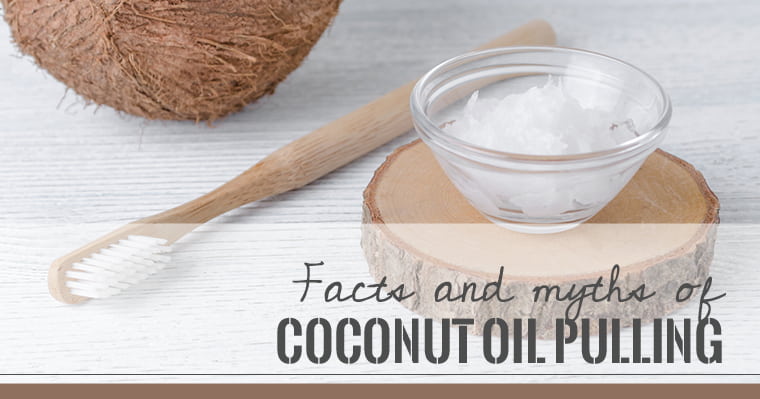 While it may seem like the latest trend, oil pulling has been around for 3,000 years.

It was used in ancient Indian medicine for essentially everything. It was believed that oil pulling could treat numerous diseases and illnesses, freshen your mouth, and much more.

But that doesn’t necessarily determine if oil pulling is safe, especially for your teeth.

Luckily, we are going to give you all the facts and uncover myths about oil pulling in this blog.

What is coconut oil pulling?

Oil pulling involves swishing around oil in your mouth, similar to mouthwash. The primary objective is to remove harmful bacteria from your teeth that cause plaque.

For oil choice, many people choose coconut oil due to its favorable taste and additional benefits. Unlike other oils, coconut oil is an antioxidant and anti-inflammatory powerhouse. It also contains lauric acid, which is effective at killing bacteria related to tooth decay.

How to coconut oil pull:

So far, so good! But the danger of coconut oil pulling happens when you are not educated on the myths vs. the facts.

First off, you should note that everything you read about oil pulling is either a myth or based on short-term studies.

There have not been any long-term studies on the benefits of oil pulling. With that said, we advise that you always consult your preferred dental provider on your best oral health routine.

Coconut oil pulling does NOT whiten your teeth.

As much as we love a shiny, white smile, there have been no studies proving this claim. This myth is likely based on people believing their teeth are whiter after oil pulling removed stains from bacteria. If you would like to whiten your teeth, consult with your dentist on your best teeth whitening options.

It’s not a medicine.

In ancient times it was believed oil pulling could cure 30 conditions. And now, some oil pulling fans claim it can improve diabetes, migraines, arthritis, and more. Unfortunately, there is no scientific evidence to prove this.

What we mean by that is, coconut oil pulling is NOT safe for babies and children. If choked on or swallowed, the oil fat can make its way into your lungs and, in rare cases, cause lipoid pneumonia.

You still have to floss and brush!

There is simply no alternative for brushing and flossing your teeth. But as we will soon get into, coconut oil pulling does offer some benefits. So instead, think of coconut oil pulling as an added piece to your oral health routine, NOT a replacement.

When coconut oil is swished around your mouth, it adheres to harmful bacteria and removes it from the tooth. These harmful bacteria can often lead to cavities, tooth decay, gum disease, and worse. Coconut oil pulling also leaves behind good bacteria, ensuring optimal oral health.

In one study, it found that coconut oil pulling could be used as a safe and effective alternative to Chlorhexidine, the main ingredient in mouthwash.

Likewise, gingivitis-causing bacteria can be removed with coconut oil pulling. This bacteria can turn into plaque, which can lead to gingivitis and other diseases. Coconut oil also serves as an anti-inflammatory, which is one of the main symptoms of gingivitis.

However, coconut oil pulling, flossing, and brushing won’t protect you alone. You still need to visit your dentist regularly for a cleaning and checkup. Gingivitis is very serious, and it can turn into periodontal disease, which is the leading cause of adult tooth loss. If you notice symptoms of gingivitis, notify your dentist right away.

Properly known as halitosis, bad breath is caused by the smell of chemicals and gases produced by bacteria in your mouth. As mentioned above, coconut oil pulling can remove bacteria from your mouth, which can reduce your chance of bad breath.

If you’ve been trying to mask your bad breath with mouthwash, think again. Mouthwash tends to kill all bacteria – good and bad – and dry out your mouth, whereas coconut oil removes bad bacteria and keeps good bacteria, and supports your saliva in keeping your mouth fresh.

So, is coconut oil pulling safe for your teeth?

Now that you can separate the myths from the facts, here is our answer if coconut oil pulling is safe for your teeth or not:

Based on the research today, coconut oil pulling can be used as a safe addition to your oral hygiene routine.

Just like how flossing and brushing are not the same thing but work toward the same goal, coconut oil pulling has its unique benefits that can help you achieve optimal oral health in conjunction with flossing, brushing, and regular professional cleanings and checkups with your dentist.

To find out if coconut oil pulling will benefit you, visit your preferred orthodontic provider today.

The content on this blog is not intended to be a substitute for professional medical advice, diagnosis, or treatment. Always seek the advice of qualified health providers with questions you may have regarding medical conditions.